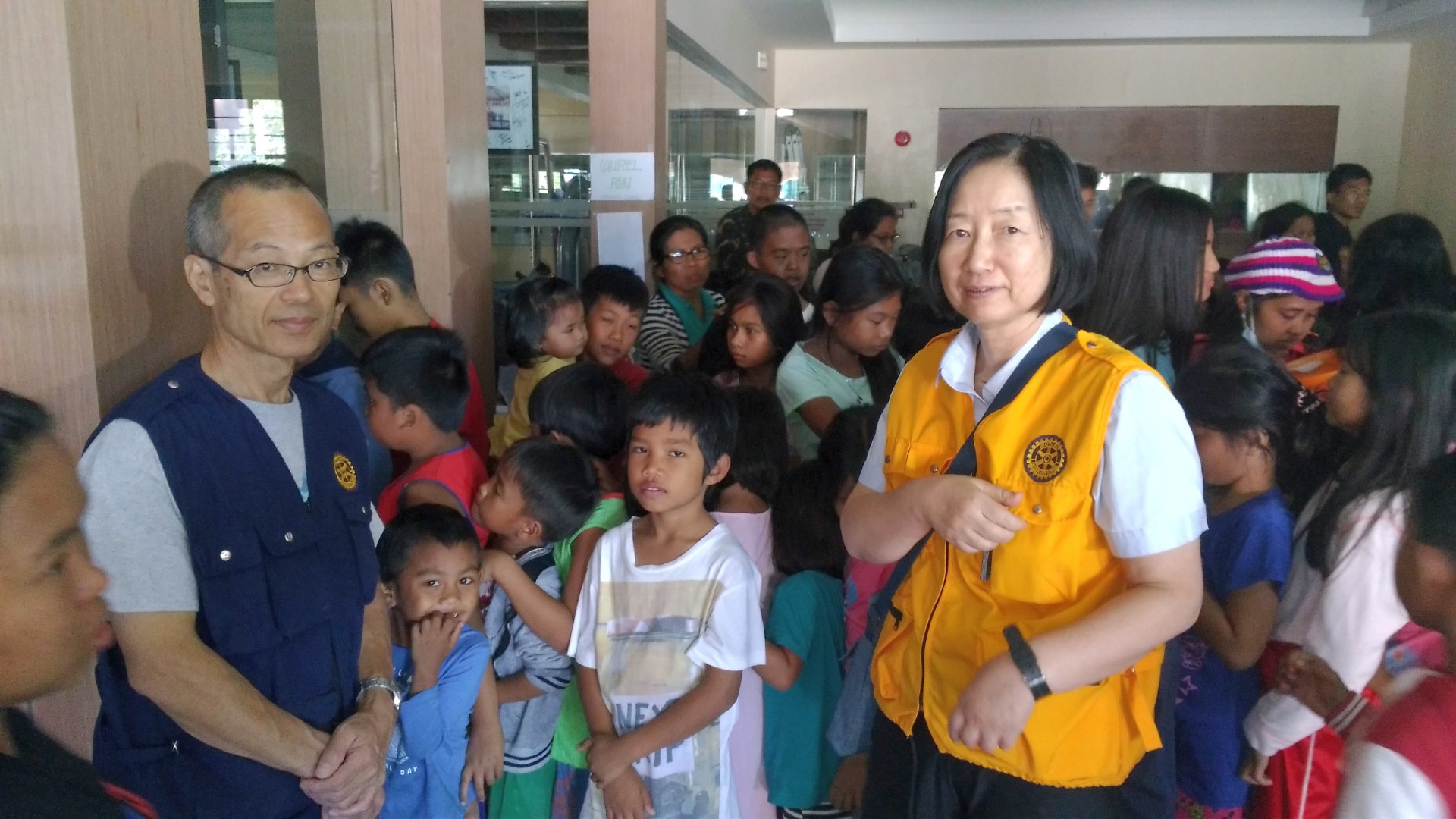 In the late afternoon of Sunday January 12, 2020, Taal Volcano, located on a small island in the middle of Taal Lake, erupted in a 10-15 km (6.2-9.3 mi) high steam-laden ash column, along with lightning and thunder caused by the interaction of the ash particles. Within a short time the low-lying areas surrounding the lake were covered with largely wet ash which inundated villages there as well as smothered the crops. No human lives were lost, but death and suffering of livestock and wildlife was evident everywhere. For example, on Volcano Island itself, a tourist spot for many years despite the history of earlier violent eruptions, only 300 of the approximately 3,000 donkeys were able to be rescued while the remainder died a slow and agonizing death.

Immediately after the vertical ash column eruption, the Alert Level was raised from then already 3 to 4 which means that an immediate explosive eruption may be imminent. This triggered immediate evacuation in the next couple of days in excess of 100,000 people for a distance of 14 km from the volcano’s epicenter, and may be raised to 17km if such an outbreak occurs. As indicated on the map Taal Volcano and Vicinity, which can be used as a reference guide, AWH is located within the 14 – 17 km zone and the Aguinaldo Highway Ridge Road through Tagaytay that provides access from Manila is located within the 14 km zone.

The 14 km circular evacuation zone is based on base surges, their buffer zones and on ballistic projectiles gleaned from updated information of historical eruptions of 1754, 1911, and 1964. Base surges are clouds of hot gases, ash, and rocks traveling horizontally at speeds in excess of 80 km per hour. Ballistic projectiles are large volcanic fragments thrown from the vents during explosions. Since a major portion of the municipality of Laurel in the province of Batangas is located within the most affected watersheds leading downslope to the ocean, their base surge buffer zones extended up to 14 km and were part of the “lock-down” evacuation that occurred in these areas. Unlike the eruptions on the Big Island of Hawaii, fissures caused by earthquakes related to volcanic activity are not expended to produce lava flows.

AWH was fortunate as it only received a very light but fertile ash layer because of the prevailing SW winds, the afternoon upslope winds, as well as the high elevation winds which blew the upper vertical ash column easterly towards Manila. The main concern for those affected by the ash but not living around or downslope of the lake was the unhealthy ash and sulfur dioxide-laden air, and breathing masks were in high demand.

At AWH the power was cut by the next day with the power outage lasting four days while most of the stores in the area also shut down during that time. With AWH depending on its oversized generator, it was able to provide water from its well along with the water delivery from the local Fire Department to its village residents and evacuees. It also served as a cell phone recharging station.

Private and public donations, largely from Manila, poured in uninterrupted on a continuous basis to the public and private evacuation centers and not only caused occasional traffic jams but also an almost unmanageable stockpile of clothing similar to what was witnessed during the Nov. 3, 2013 Typhoon Yolanda (Haiyan) at Caritas in Manila. At the same time Rotary International Multinational Manila (RIMM) and District 3810 Rotarians, as requested by DSWD (Department of Social Welfare and Development), provided additional immediate needed supplies such as hygiene kits inclusive of 130 water buckets (two to each classroom housing ten families), sleeping blankets, underwear, plastic plates, etc., for the Alfonso evacuation center, local evacuees at private homes, and the Laurel Evacuation Center at Splendido, and expanded such support as needed such as toys and school supplies for the children and youth at the Laurel Evacuation Center, located at the edge of the 14 km evacuation zone. It housed about 491 evacuees including 160 children and youth in the indoor basketball court. While it is only a drop in the bucket compared to the overall needs, it perhaps made life easier and eased the suffering and pain of those that were and are being affected.

AWH and RIMM will continue to assist the community with its long-range planning efforts in permanently relocating residents from areas that have become inhabitable. After the 1754 major eruption, most villages and towns were relocated away from the lake shores. However, new villages were then reestablished because of population pressure to make a livelihood on the fertile volcanic ash soil, from fishing and fish cages in the lake as well as from almost year-round tourist arrivals from nearby Manila because of its scenic location.

While the initial confusion and panic has somewhat dissipated more than 10 days after the eruption and the News Media has now clarified the most important needs for the many evacuation centers, politics and science are still battling with the immediate needs of people. There is still a total lockdown in the most affected areas and residents that refused to evacuate and were/are hiding to protect their homes and livestock are hunted and force-evacuated in handcuffs if necessary. In borderline evacuation areas such as the Tagaytay Ridge where the country’s government had ordered a total shutdown of all commercial business inclusive of markets and restaurants, many have reopened in violation of the orders as the local governor and former mayor of Tagaytay insists that it is required for the survival of the businesses and the remaining residents.

Overall, evacuation was able to proceed safely because the eruption occurred during the dry and cool season. Little rain if any fell in the affected areas for 12 days after the initial eruption, followed by light rains on the 13th and 14th. Based on the reduction in sulfur dioxide emissions and a reduction in earthquakes, the possibility of an imminent violent eruption was reduced to 30% but sulfur dioxide emissions and earthquakes vary day by day. If evacuation lingers into the hot and wet season with Alert 4 Level in effect, some of the overcrowded public and private evacuation areas may become unbearable as presently operated. The best scenario would perhaps be a short and non-violent eruption in the near future with earthquakes, ash and sulfur dioxide emissions largely subsiding thereafter and Alert Level 4 being reconsidered for downgrading. While this would not preclude a future violent and destructive eruption in the near future based on historic eruption evidence, it would provide a window of opportunity for local and regional governments to rezone affected areas and even relocate villages and towns out of high risk areas as had already been done after the 1754 violent and long-lasting eruption.

Despite the apparent opposition of some scientists because of the continued venting off ash and toxic fumes from Taal Volcano but with the support of elected officials, the Philippine Institute of Volcanology and Seismology (PHIVOLCS) on Sunday morning downgraded Taal Volcano to Alert Level 3 from Alert Level 4 “marking a decreased tendency towards a hazardous eruption.”

The Batangas provincial government immediately lifted lockdowns it earlier imposed on 12 cities and municipalities, or on their portions that lie within the volcano’s danger zone. Residents of these places are now given the option to return to their homes although they are still welcome to stay in evacuation centers.

However, the following areas remain on lockdown as they lie within the 7-8 kilometer radius of the volcano’s main crater. This means people are still prohibited from entering these places: Taal Volcano Island (permanet lockdown), Agoncillo, Laurel.

The provincial governments stressed that although residents of areas where the lockdown is lifted may already return, Taal Volcano may still erupt. They must be constantly alert and ready to evacuate within one hour of notice, in case Taal Volcano’s activity escalates again and the status is raised to Alert Level 4.

The chance of a hazardous eruption remains, said the Philippine Institute of Volcanology and Seismology (Phivolcs) when it lowered Taal’s status to Alert Level 3 on Sunday morning. Phivolcs also warned of the likely occurrence of lahar or heavy mudflow coming from areas right beside Cavite province, and in elevated areas in Agoncillo and and Laurel towns in Batangas. Rain or volcanic tremors may disturb stored volcanic ash in these areas, and cause it to flow toward lowlands and waterways. Residents must take care when returning to areas heavily affected by ashfall. Unstable structures, slippery roads, fissures, and the lack of running water and electricity increase the risk of physical injuries (Rappler.com).

The mayor of Alfonso has ordered 30,000 3M N95 (medical grade) masks for its residents in case of a sudden eruption during which it would also be advisable to immediately shelter in place. It is also advisable that all returning evacuees be furnished with masks as continuous toxic fumes even without further eruptions could and will have long-term health effects. 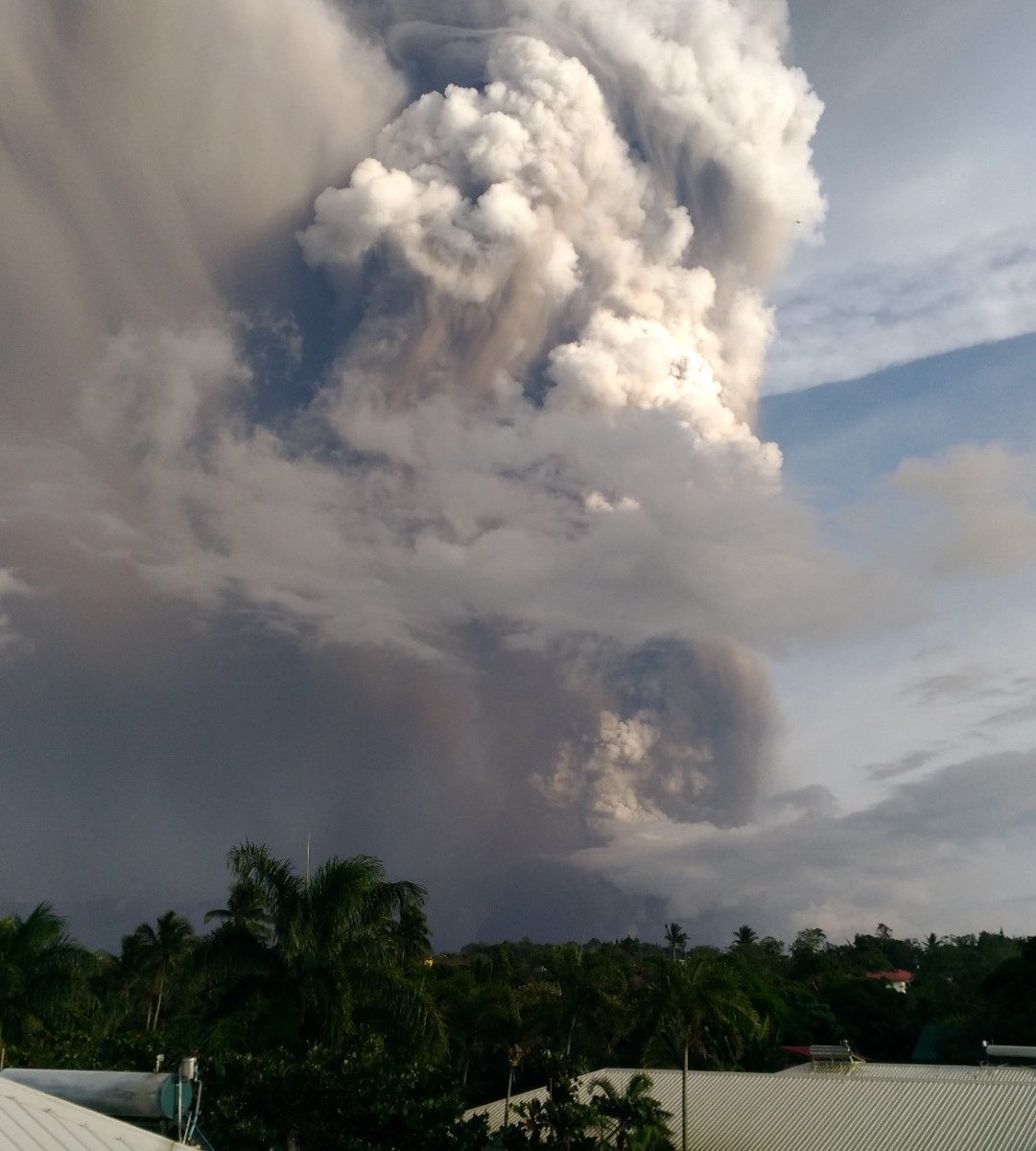 On January 12, 2020 around 4pm, Taal volcano erupted. The ashes were brought toward Manila areas due to wind direction at that time. Small seismic activities were observed frequently after the eruption. Manila airports were closed the next day long.

The electrical posts were affected by the frequent tremors along Aguinaldo Highway and power outage started the following day. AWH had 5 consecutive days of blackout and all the communication lines were cut.

All the guests who planned visiting for wellness program in January had to cancel due to this volcanic activities.

Because of this cancellation, AWH staff went immediately to assist evacuees from Talisay and  Laurel, Batangas province where volcanic activities were intense.